I like to use 2017 as the official start year of PhilaCarta, but it took more than a decade (and possibly my entire life so far) of experiences and many projects *not quite* working out to get to this point. So how does a pink plastic pig, concert posters and William Penn fit into the PhilaCarta story?

I'll start in the very beginning: I love to draw. This love started in toddlerhood and never went away. My mom likes to tell a story of when I was 2 or 3 and she found me holding a small plastic pig in one hand and a crayon in the other - I was staring intently at the pig and trying hard to draw it, exactly the way it looked in real life. I remember this pig very vividly - it was not a cartoon fisher price pig, it was a realistic looking pig from one of those basic, cheapie farm sets and it was not cute and not smiling and I thought it looked a little scary...but I would stare at it often, trying to figure out all the parts, especially the place at its mouth where there was an extra bit of plastic that I knew was a mistake and wasn't supposed to be there. Maybe it wasn't only because of this pig, but anyway, I love to draw, enough so that when it came time to go to college, I couldn't think of anything else I wanted to study more than drawing, eventually earning a BFA in Illustration from University of the Arts in Philadelphia. I was very lucky during college to get my *very first* freelance illustration job  - creating handbills/posters for shows at the Electric Factory and other Philly concert venues. It didn't pay very much money, but I had almost full creative freedom, refined my drawing skills and got into a ton of concerts for free - it is still one of my favorite jobs of all time. I also started an online shop on eBay and Etsy (during the early days of Etsy - 2006!) selling prints/posters of my work directly to customers. I got some sales but I wasn't too serious about putting myself out there ( if only I could go back in time, I'd do a ton of things differently!)

Getting a "Real Job"

After a few years, my concert poster job ended I stopped selling my work online. I also found out it was hard to find consistent illustration work, so I ended up getting a full time job as a graphic and product designer. This job had its perks - I worked on projects that were sold nationally in huge stores like Target and Walmart, I learned to work fast and started recognizing market trends.  However, my job was to be be a designer, not an illustrator so I rarely had the opportunity to draw. The company I worked for only made items that were mass produced in China and sold at $5 or less, so they were often low quality and would quickly break and become trash. Trying to buy locally made products, being kind to the environment and reducing waste is important to me, so these two parts of my job weighed heavy on my mind.

Fast forward to 2017 - I had now been working in the design world for over a decade - after leaving my product design job, I had worked at various design companies and dabbled in multiple types and styles, including corporate design for a large financial institution, production work for an ad agency, web design for small businesses and packaging design for a toy company. After trying all these different paths, I kept coming back to three main points, I loved the flexibility and freedom of working from home, I wanted to own my own business, and most of all, I wanted to draw as much as possible.

The Guy with the History Degree There is one big part of my story I haven't mentioned yet, and that's the history component - I like to add a bit of historical research behind all of Phila Carta's products, even though it makes everything take longer to finish.  I will admit, I have NOT been a history fan since childhood, after math and gym it was one of my least favorite subjects in school. I don't have a great memory for facts or names or places and I didn't know much about Philadelphia history before I started. But I have always loved learning new things, and I happen to have a husband with a great memory and degree in history who would occasionally mention some random historical fact which would start my head spinning and make me want to know more. It also helps that he works at a family business that has been operating on Philadelphia's Jewelers Row since 1898 (!!!) and sometimes brings home historic relics that he finds in the basement. 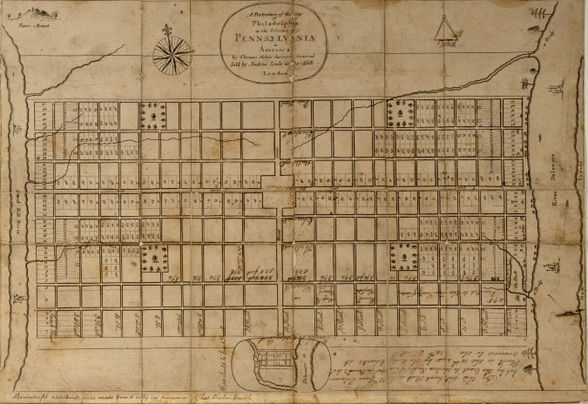 My husband was the one who told me about the first map of Philadelphia from 1683 and William Penn's plan for the new city and the importance of Philadelphia's five squares. This inspired me to create a modern day version of the map for my final project of a letterpress class I was taking in early 2017. While the map started as a "just for fun" personal project, something clicked while I was working on it and I knew I wanted to turn it into something more. When the class ended, I hired a letterpress printer (who actually knew what they were doing, unlike me) to re-print the map and reached out to a few stores/museums to see if they would be interested in buying it. The rest is, (as they say) HISTORY ;)